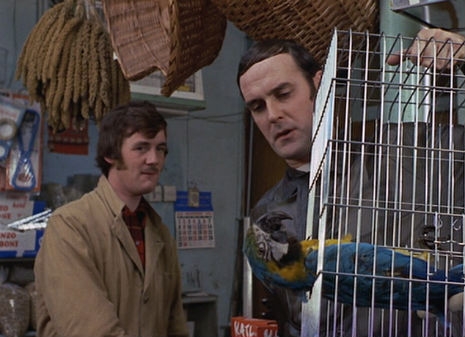 “Hello, I Wish to Register a Complaint”

Many a Monty Python fan will recognise the title of this blog as the opening line from the “Dead Parrot” sketch, where John Cleese, the customer who had recently purchased a parrot, wants to complain to the pet shop salesman Michael Palin, because the bird he “purchased not half an hour ago from this very boutique”, was dead!  The salesman then spends the next 15 minutes arguing that the parrot isn’t dead, “it’s resting”, and so forth.

This is obviously meant to be amusing (and as a Python fan myself, I think it’s a comedy classic), but the unfortunate truth is that this only parodies what is all too common when someone makes a complaint.

Recently, two high profile charities, the National Deaf Children’s Society and Blind Veterans UK, caused complaints to be raised through their practice of sub-contracting fundraising to an external fundraising agency.  I would emphasise that neither the charities themselves nor the practices employed by their sub-contractors were found to be at fault.  However, the way they handled the complaints was found to be inappropriate by the fundraising regulator.  Apart from irritating the complainants, this is not great publicity for these charities.

We all love it when things go to plan, but sometimes they don’t.  So what do you do when you get a complaint?

The Bridge Trust itself recently received a complaint about our new house we are currently preparing to open.  A neighbour was very cross that we had not asked the neighbours first, had not consulted them and had not even communicated that we were opening a “doss house on their doorstep”.  They had already complained to the Council and were referring it to their MP, before they complained to us.

The fact was that there was a huge gulf between what the neighbour imagined we were doing with the house and the type of people who would be living there, and what was actually the reality of the situation.  We didn’t do any of the things asked for because we have never come across this reaction in our 30 years of providing many different properties for our supported housing.  After explaining exactly what we were doing with the house the neighbour was much happier and more understanding(ish).  Part of the reason for this was that I acknowledged that we had not anticipated this reaction and was VERY SORRY for causing any upset.  I said that I now understood their point of view; thanking them profusely for getting in touch otherwise I would never have known about this discontent.  I acknowledged that perhaps they were right and in hindsight I could see how communicating our intentions first may have helped and that I would now consider communication to all the neighbours.

I did decide to write to the neighbours and have heard no further complaints since.  (Although a couple of neighbours have in contrast, voiced their full support for what we are doing!)

Anyway, my advice is that if you are ever in the situation where someone wishes to “register a complaint” (whether about a dead parrot you sold them or otherwise), firstly, don’t take it personally even though you may be directly on the receiving end.  Deal with it quickly, empathetically and transparently and if you have made a genuine mistake, apologise and undertake to do whatever you can to make sure it doesn’t happen again.  Remember, that even if there is a short-term cost to putting something right (even if that’s just being a little bit humble), good customer care includes how we handle complaints, and is essential to longer-term reputation and ultimately, our success.